How to Make Homemade Katayef 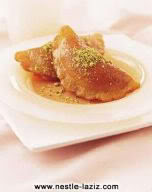 A traditional Ramadan treat served after the fast is broken. No home could ever hold their head up without a plate of these wonderful homemade Katayef treats.
Ramadan is a month of fasting and a month of worshiping Allah. It is also a month of much eating and laughter. As the Muslims break their fast to many tasty and delicious prepared foods, the aroma of the katayef fill the room. There is nothing so traditional during Ramadan, than katayef.

Katayef is reported to have originated in Egypt as the many vendors sold this on the streets, but some say Syria was the first to sell this famous treat. Either way, each country has their own recipe and none can be better than this one. It is easy and very simple to make.

In a bowl place 1 tablespoon of dry yeast and 2 tablespoons of warm water. Make sure the waster is not too warm because at 130 degrees you will ruin the yeast. Let it ferment for 5 minutes.
In the same bowl add:
With a mixer or in your food processor mix this batter very well. Cover and let this batter rise for 1-2 hours or until the batter has doubled in size. When the batter has risen, add 1/2 teaspoon of baking soda (bicarbonate) and 3 drops of lemon juice.

Heat a heavy based skillet on high heat and brush the skillet with some oil. Drop the pancake batter on to the skillet in rounds of 10 cm and cook only on one side. You will see the top start to bubble from the baking soda. Remove the pancakes from the skillet and place on a platter to cool.

Traditional Katayef Filling
Mix all the ingredients together and take one tablespoon and drop on to each pancake and seal with your fingers. Place the sealed pancakes on a well greased pan and brush the top of each katayef with some melter butter. Bake in a hot oven of 400 degrees. When the katayef are browned, remove from the oven.

*Note - Many Muslims will fry the katayef in oil, opposed to baking them.

Place in a pan:

Bring this to boil for one minute only. Do not boil longer, as the atter will harden and not be usable.

Cheese Katayef
Mix the two ingredients together. Place a tablespoon of the mixture on the pancakes and seal with your fingers. Bake as you do the traditional recipe or fry in oil.

It is traditionally served with the katayef dipped in the syrup. But with many choosing to reduce the sugar in their diets, you can place small bowl of the syrup or atter by a plate of katayef. Katayef is a tradition in all Arab countries. Let it be a tradition in your house today.