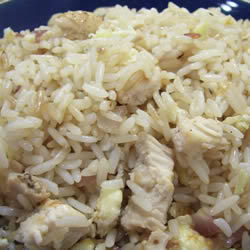 Rice Dish/Antsyfanny
If you ask any Arab what we are cooking and they would simply say, "Upside down."  Upside down means when you invert the meal, what is on the bottom is now on the top.  So you put the meat in first and then the veggies and then the rice.  Some in Jordan will put the meat and the rice and fry the eggplant or cauliflower separate and then place the veggie around the maglooba and not inside.  Either way, it is easy to make.  We will make this meal with chicken as it is the easiest to serve.