Authentic Instructions and Recipe for This Arab Tradition 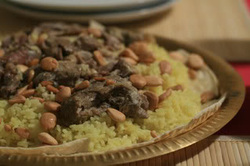 As you search the internet, you will find very few recipes for this delicacy. It is served in every home in the Middle East and it is served to very special guests. Mansef is as much part of the Middle East as steak and bake potato is to Texas. It is a very easy meal to prepare, but with many steps. For the huge wedding parties and dinners of condolences, the head of the lamp is placed on the mansef. This is not a sight many will like to see. Mansef may be served with the laban on the rice already or in separate bowls. It is traditional to serve in separate bowls and then each guest pours their own laban on their portion. The mansef is served on one huge tray and each guest is given a spoon or fork to eat from the large tray. For any guest not caring to eat this way, separate plates should be provided.

How to prepare the meat

Meat is traditionally used, but chicken can be used instead. A guest in the Middle East would be insulted if served chicken, but for family it is okay.


How to make the rice


How to make the Laban or yogurt

There are two ways to prepare the laban. The first is the easiest and the cheapest.

Fryng the pinenuts, almonds or peanuts

On the bottom of the tray should be some very, very thin wheat bread. Then put the rice on top of the paper thin bread. Top with the meat pieces around the rice and a sprinkle of nuts. The final garnish should be some chopped parsley.

Place the yogurt in separate bowls for the guest to use as needed. The traditional way to eat Mansef is with your fingers, but forks will be supplied for the inexperienced.